EMF and the female body: How does this phenomenon affect women?

Our inescapable exposure to EMF is affecting us in many ways we have yet to discover. But it’s already known that electromagnetic fields and radiofrequency radiation (RFR) interact with human tissues and have adverse effects on many bodily functions, including hormone segregation in women. 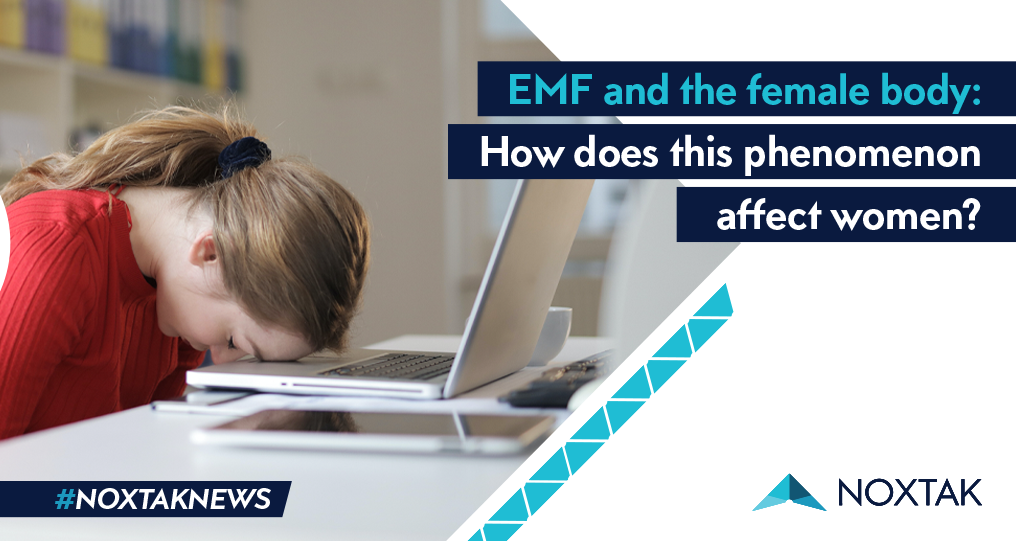 During the last four decades or so, there has been a growing concern about the effects of electromagnetic radiations on biological systems in general. There has been a global introduction of electronic devices on a massive level (telecommunications, more electronic devices, wireless and smart technologies, etc) that are now new sources of electromagnetic fields (ELF-EMF), and radiofrequency microwave radiation (RFR). All of this has added another layer of pollutants (electropollution) to a growing list of environmental contaminants that are constantly affecting our health.

And this is because the 100 trillion cells of the human body communicate with each other by subtle low electromagnetic signals and through biochemical reactions. These signals carry the information that becomes translated into all the biochemical and physiological processes of our bodies. It is easy to understand how continuous exposure to electromagnetic radiation can drastically distort and disrupt this cellular communication and result in abnormal cellular metabolism or a disease.

Besides the continuous EMF exposure, modern women are daily exposed to many other threats to their bodily functions, such as stress, poor quality food, lack of sleep, and pharmaceutical medications. This toxic cocktail is affecting their bodies is many levels, including endocrine functions, fertility, immune system, and even moods and behavioral patterns.

EMF and the endocrine system

Hormones lead many vital processes in our bodies. Most hormones such as estrogen, progesterone, testosterone, insulin, and melatonin are made in parts per billion or parts per trillion, but even small hormonal fluctuations can create huge physiological changes; and when our delicate hormonal balance and rhythms are altered, the body’s ability to regulate fundamental systems is ruined.

The pineal gland is the primary source of melatonin, a hormone that regulates many key functions of human growth and health. Melatonin is produced about 90 minutes after falling asleep, and many studies have shown that blood concentration of the hormone rise after dark from low daytime values and usually peak in the middle of the night.

“Researchers are increasingly surprised at the extent of the physiological processes that are either controlled or influenced by melatonin: it regulates the circadian rhythms governing our waking/sleep cycle, and it is one of the most efficient destroyers of free radicals which ensures normal DNA synthesis and cell division.  Melatonin not only inhibits the release of estrogen but also suppresses the development of breast cancer.  Another anticancer property is its ability to increase the cytotoxicity of the immune system’s killer lymphocytes.  It is even able to enhance the immune system and counteract stress-induced immunosuppression”, claimed Dr. Sherill Sellman in an article called Effects of Electropollution On Hormones and Breast Cancer.

Research made by Dr. Charles Graham found that magnetic fields had an effect on two other hormones. Overnight exposure of women to elevated levels of EMR in the laboratory significantly increased estrogen levels, which is a known risk factor for breast cancer. Also, in men, EMR exposure reduced levels of testosterone, which has been linked to testicular and prostate cancers.

“Gramham also believes that EMR may actually fit the definition of an endocrine disruptor better than many hormone-mimicking environmental pollutants because magnetic fields appear to elicit their effects by acting on and through hormones, rather than as hormones”, added Dr. Sellman in her paper.

There is definitely growing attention focused on EMFs’ proven ability to lower sperm count and sperm motility in men. But women’s capacity to conceive could also be compromised. The reason for this is that the endocrine system and the nervous system control the reproductive system, and neuroendocrine changes caused by EMFs could also cause hormonal change, which can lead to infertility in women.

According to Effect of electromagnetic field exposure on the reproductive system, by Myung Chan Gye and Chan Jin Park, SLF-EMF exposure directly affects the pineal gland, deteriorating the biological effect of melatonin, and melatonin regulates the pulse of Gonadotropin-releasing hormone in the hypothalamus. Eventually, this can alter the production of gonadal sex steroids, resulting in changes in the reproductive cycle.

Also, in The effects of electromagnetic fields on the number of ovarian primordial follicles: An experimental study, released in The Kaohsiung Journal of Medical Sciences, the authors found a significant decrease in the number of ovarian follicles in rats exposed to an EMF and suggested further clinical studies to reveal the effects of EMFs on ovarian reserve and infertility.

As of now, different studies on mammals have shown that EMFs are able to prevent the formation of the antral follicle, inhibit ovulation, and reduce the total number of corpora lutea, and given their capacity to extend the lifetime of free radicals they favor cell destruction by increasing the oxidative stress, which results in DNA damage.

And there are also huge risks during pregnancy. A group of investigators at Kaiser Permanente’s Division of Research in Oakland found that exposure to more than 16mG (milligauss) of electromagnetic energy increased a woman’s risk of miscarriage by six times in the first 10 weeks of pregnancy. The constant exposure to EMF has also been proven to be risky for the child’s physical and behavioral development.

Mood and behavioral changes due to EMF

Neurotransmitters, a special class of hormones that include serotonin and dopamine, play a major role in moods. Changes in serotonin levels are known to be associated with depression. For example, lower levels of this chemical in the brain have been linked to an increase in suicide frequency.

In humans, there’s evidence of an association between exposure to job stressors, which indirectly included EMFs, and increased emotional responses (such as irritability) and psychological mood state (anxiety, depression, anger, vigor, fatigue, and confusion).

According to the article Microwave frequency electromagnetic fields (EMFs) produce widespread neuropsychiatric effects including depression, released by Martin Pall in the Journal of Chemical Neuroanatomy, “the mechanism of action of microwave EMFs, the role of the VGCCs in the brain, the impact of non-thermal EMFs on the brain, extensive epidemiological studies performed over the past 50 years, and five criteria testing for causality, all collectively show that various non-thermal microwave EMF exposures produce diverse neuropsychiatric effects.”

In our several years of research and development, we have gone through several electrohypersensitive females in our case studies, and we can say they are a vast majority. They manifested several common symptoms such as headaches, dizziness, fatigue, and hearing loss, especially tinnitus; but we also noticed that some of them manifested to suffer increased irritability, depression, hormonal cycle dysfunctions, and even issues to conceive.

After thorough studies, most of them decided to implement our SPIRO solutions in their places. In a follow-up, all of them manifested feeling significantly better after an average of a 20-day period. The most severe cases have been followed up on a yearly basis, and they claim they haven’t ever felt the same after using SPIRO.

One of our most successful cases is a 75-year-old woman who lived alone in a family home in Aruba, who presented 25 of the 29 common EHS symptoms with frequent or permanent manifestation. We implemented several SPIRO solutions and suggested some changes to 100% neutralize the electropollution. For 3 years straight, no updates were needed and her quality of life improved significantly.

There were also two women, one in Aruba and the other in Miami, that stated that they started feeling quieter and with less irritability since they started using the SPIRO Card L2, the smaller solution available in the SPIRO Family.

Also, one of our main priorities is to protect children and expectant mothers. That’s why we always advise our clients to protect their home, but especially the spaces and objects that pregnant women and children use to avoid problems in the pregnancy process and the kid’s cognitive and immune development.