The bees are disappearing: Why should you be worried about this?

It takes more than soil, water, and sunshine to make the world green; the bees also have a vital role in nature. But electrosmog, among other things, is endangering them. Have you thought about how our world would be without bees? 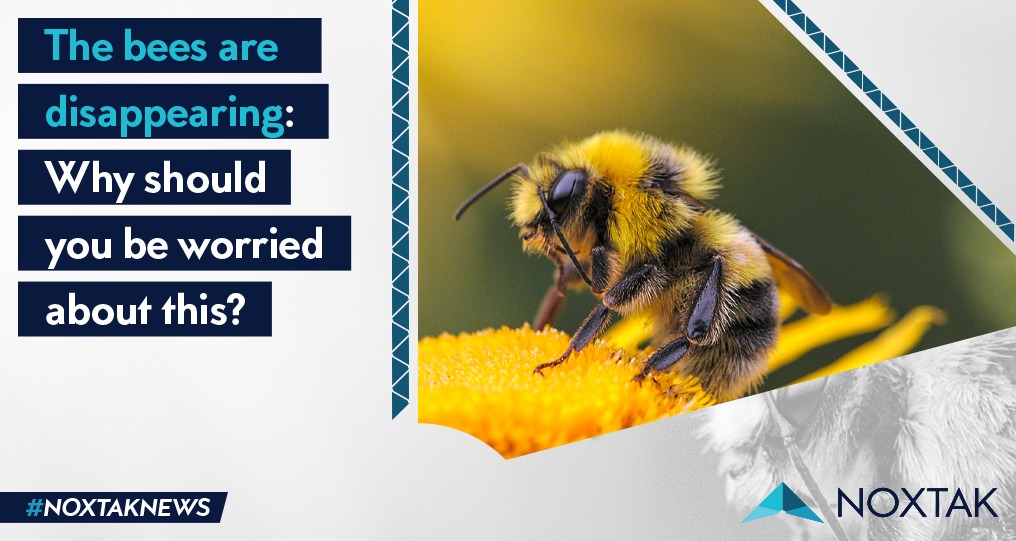 The bees have an amazingly important role in nature. They pollinate 70 of the around 100 crop species that feed 90% of the world. Without bees, we may lose all the plants that bees pollinate, all of the animals that eat those plants, and so on up the food chain. This means our world could struggle to sustain the global human population and our supermarkets would have half the amount of fruit and vegetables.

Nowadays, bee populations around the world are in decline. Possible reasons include the loss of flower meadows, the crab-like varroa mite that feasts on their blood, climate change, the use of pesticides, and electromagnetic (EMF) pollution. Yes, electrosmog is playing a big role in this great loss, whether you believe it or not.

A world without bees would be chaotic. We don’t have the technology to do what bees do, and in case we get it, it would cost trillions to make it work. So losing bees is, literally, a matter of life or death. So how can we stop this from happening? Is there a way to protect our top important animal?

The reasons why bees are the top important animal in nature

As we previously mentioned, bees are the top pollinators in nature. Most plants require the transfer of pollen from the male part of the flower (the anther) to the female part (the stigma). As bees move from flower to flower in search of nectar, they leave behind grains of pollen on the sticky surface, allowing plants to grow and produce food.

Bees pollinate billions of plants each year, including millions of agricultural crops. In fact, pollinators like bees play a key role in one out of every three bites of food we eat. Also, many species of wild plants depend on them as well. Bees are responsible for the production of many seeds, nuts, berries, and fruit, which serve as a vital food source for wild animals.

On the other hand, honey is also very important. It feeds critters like birds, racoons, opossums, and insects will raid beehives for a taste of nutritious honey (and bee larvae). Bees themselves are also a part of the food chain.

Bees are known for their elaborate hives, but they also help build homes for millions of other insects and animals. Their role as pollinators is vital in the growth of tropical forests, savannah woodlands, and temperate deciduous forests.

As pollinators, bees play a part in every aspect of the ecosystem. They support the growth of trees, flowers, and other plants, which serve as food and shelter for several creatures.

Why are we losing them?

Bees are facing many threats nowadays from different fronts. The interaction between these threats, which have led to nearly 1 in 10 of Europe’s wild bee species facing extinction, makes an unpredictable future for bees and many other pollinators.

According to Friends of the Earth, these are some of the most lethal threats bees are facing today:

EMF: a big and actual reason why we are losing them

Bees, like many other animals, are incredibly susceptible to electromagnetic fields, but little attention has been given to the potential harmful effects of electromagnetic waves on them. According to the paper “Disturbing Honey Bees’ Behavior with Electromagnetic Waves: a Methodology”, written by Dr. Daniel Favre, there are reasonable grounds for admitting that RF-EMF severely impacts the nature, the health of all living organisms (plants, insects, birds, mammals), honeybees included.

“The latter hymenoptera fly often far from their hive, and rather high. Doing so, they approach RF-EMF of high intensities (due to the presence of masts), are impacted by the electromagnetism, and can no longer find their way. Indeed, it is known that honeybees possess magnetite crystals in their fat body cells and that they present magnetic remanence; these magnetite structures are active parts of the magnetoreception system in honeybees”, stated Favre in his investigation.

Dr. Favre also found that, within an hour of exposure, the bees within these hives began to emit something called a “piping signal”, which is a higher-frequency sound made by the bees’ wings when they are agitated or in swarming mode.

Is there a solution?

There are many things that we can not avoid or suddenly change in order to protect bees, but there are many things we could gradually do to start protecting them. If you are a garden enthusiast, you can start by growing a bee friendly garden. Plant a range of flowers in your garden so bees have access to nectar and leave water around for them (if you add a bit of white granulated sugar, better!).

While building your garden, try to go as organic as possible and avoid pesticides, fungicides or herbicides on plants or in your garden. Plants get contaminated and the product will likely reach the bees and kill them. Make sure the plants you buy are not pre-treated with neonics pesticides.

Another way to help is buying raw honey from your local beekeepers. Avoid honey sold in bulk or in the supermarket unless you are sure of its provenance and quality. Meet your beekeepers and check their sustainable beekeeping practices.

Finally, one of the best ways of helping is by spreading awareness. Many people are not aware of the importance of bees to our nature and every living species. By educating people about the dangers they face and how to help them, we can look for more solutions in common to protect them.

At NOXTAK, we contribute to the preservation of bees and other endangered species through our technologies. Our purpose is to educate people on the importance of creating a human and nature-friendly standard for technologies and impulse a global consensus that ensures safer habitats for everything and everyone.

Our SPIRO technology has proven to be an effective solution to filter the artificial EMF generated by man-made sources without blocking the waves. The purpose of our technologies is to eliminate the unbalances and interferences within artificial EMF, which cause the harmful effects to our health and the environment, and make them behave the same way as the natural EMF produced by the earth.

We, as a part of the EFEIA initiative, are putting into motion a project to protect the hives and certify apiaries protected as Electrosmog-free Environments. We truly believe that is a reasonable action and it’s our way to act now before it is too late. NOXTAK is willing to redirect a part of its profits to manufacture SPIRO products to exclusively protect hives and sponsor the deployment of each SPIRO filter.

We know that technologies are necessary and make our world better, so encourage their use and development under an electro-clean standard. This is our contribution to this cause and to humanity itself.