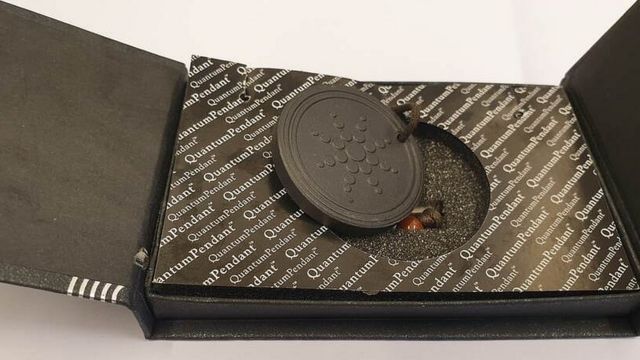 People who wear “anti-5G” pendants to “protect” themselves from radio frequencies emitted by phone masts have been told by the Dutch nuclear authority that their necklaces are dangerously radioactive.

Owners of “quantum pendants” and other “negative ion” jewelry have been advised to store them away, as they have been found to continuously emit ionizing radiation.

The product alert was issued by the Dutch authority for nuclear safety and radiation protection (ANVS) in relation to 10 products.

“Exposure to ionizing radiation can cause adverse health effects,” the safety agency said. Due to the potential health risk they pose, these consumer products containing radioactive materials are therefore prohibited by law. Ionizing radiation can damage tissue and DNA and can cause, for example, a red skin. Only low levels of radiation have been measured on these specific products.

“However, someone who wears a product of this kind for a prolonged period (a year, 24 hours a day) could expose themselves to a level of radiation that exceeds the stringent limit for skin exposure that applies in the Netherlands. To avoid any risk, the ANVS calls on owners of such items not to wear them from now on.”

As governments across the world have started to establish the infrastructure for fast 5G internet, a range of groups have emerged voicing fears over the health effects of mobile telephony.

The concerns vary from questioning the level of research that has been done into the impact of radio frequencies and close proximity to masts, to allegations that 5G is the cause of anything from headaches to immunodeficiencies.

The World Health Organization has said that 5G is safe and that there is nothing fundamentally different about the physical characteristics of the radio signals produced by 5G compared with those produced by 3G and 4G.

Despite this, an industry suggesting that certain types of jewelry, including one product mentioned in the Dutch alert that claims to “utilize pure minerals and volcanic ash that are extracted from the Earth,” has burgeoned.

Last year, 15 EU member states called on the European Commission to address a spate of conspiracy theories that had led to arson attacks against telecommunications masts.