Could Autism be linked to EMF exposure during pregnancy and after birth?

Emerging research is increasingly starting to establish a significant link between EMF exposure and autism, but there are still a significant number of detractors in the mainstream scientific community. This is what you should know. 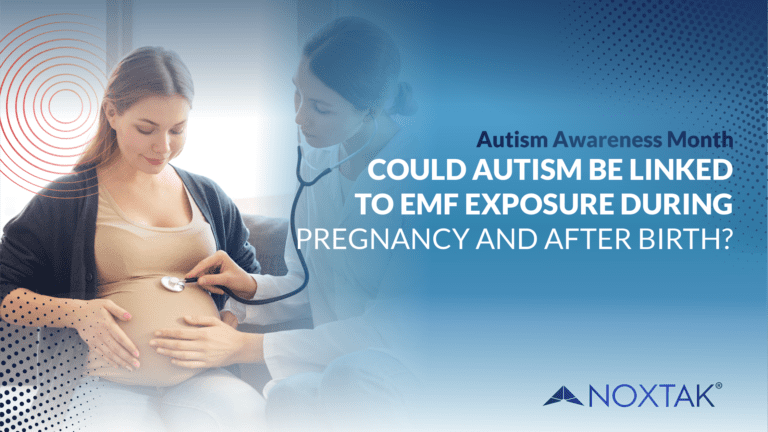 Children are one of the most exposed and highly vulnerable populations to EMFs. Zillenials and Alphas are digital natives who are not only connected 24/7, but they were also immersed in EMF emissions since their very conception and during all pregnancy, as phones and overall technologies have become an essential part of our lives, and expecting moms are not an exception to this.

We have been using cellphones and wireless technologies on a daily basis since the late 80s, it has been less than 50 years since this behavior started and we don’t know yet if this may have an effect on the generations born up to now. Research is in progress and may continue for a couple more decades before that is determined, and probably a couple more years for it to be widely accepted and known.

Now, since the exposure and the concerns started to be voiced, many experts in different areas of science have been investigating the possible repercussions of electromagnetic pollution on constantly exposed fetuses and children, and some studies have concluded so far that children are more vulnerable to radiation than adults, and that’s because their developing bodies absorb more than fully grown bodies.

Considering this, can it be a coincidence that the alarming increase in registered autism cases started in the 90s and is still growing now? We already know there are biological effects due to EMF exposure, but can Autism be related? Decades of investigation are still needed, but we believe it is worth it to keep studying EMFs to unravel a possible relationship and look for solutions.

About the Autism spectrum disorder

Autism, or autism spectrum disorder (ASD), refers to a broad range of conditions characterized by challenges with social skills, repetitive behaviors, speech and nonverbal communication. According to the Centers for Disease Control, autism affects an estimated 1 in 44 children in the United States today.

Scientists believe there are multiple causes of ASD that act together to change the most common ways people develop. According to the CDC, we still have much to learn about these causes and how they impact people with ASD.

The boom in Autism Diagnosis

The number of children diagnosed with autism spectrum disorder (ASD) has risen consistently and dramatically since the 1990s. According to the Centers for Disease Control and Prevention (CDC), as of 2016, approximately 1 in 54 children in the United States was diagnosed with autism. In 2000, the corresponding rate was approximately 1 in 150 children. The rate is notably higher in boys (1 in 34) than in girls (1 in 144).

There’s no way to determine an exact reason for this alarming increase, but it’s likely that significant changes in diagnostic criteria and reporting practices, in addition to greater awareness and possibly environmental factors, are responsible. Others argue that the rate is increasing because of the rising age of parents, especially fathers. This doesn’t explain the whole story, however, as increased paternal age accounts for only about 3% of the increase.

The cause of autism is still unknown, though research has pointed to a combination of genetic and environmental factors. The clearest evidence involves certain events occurring in utero or during birth. These include advanced parental age at time of conception, prenatal exposure to environmental pollution, maternal obesity, diabetes, or immune system disorders, extreme prematurity or very low birth weight, or any birth difficulty leading to periods of oxygen deprivation to the baby’s brain.

What do scientists say?

The opinion around if EMF may have something to do with autism is highly divided. Many in the mainstream scientific community say there’s not enough evidence to establish a relationship between non-ionizing radiation exposure and autism in children, but there are academics abd studies that say otherwise.

Dr. Robert C. Kane, an expert in telecommunications, mentioned in 2004 that it is generally accepted in the scientific community that radiofrequency (RF) radiation is a biologically active substance and human exposures to RF radiation have become pervasive during the past 20 years. Considering this, he has suggested that fetal or neo-natal exposures to RF radiation may be associated with an increased incidence of autism.

According to Dr. Martin Pall, this might be an effect of voltage-gated calcium channel (VGCC) activation and increasing the amount of calcium within the brain cells. As it is known, EMF exposure generates this reaction in VGCC, and the excess of calcium creates inflammation and ultimately cell death, contributing to autism spectrum-related symptoms.

Dr. Martha Herbert and EMF expert Cindy Sage also released a paper in 2013 that drew a relation between signs of autism and symptoms of overexposure to EMFs. These symptoms include immune aberrations, low total and reduced glutathione levels, lower activity of the anti-oxidative stress system, and mitochondrial dysfunction. A common attribute among individuals with autism is oxidative stress, which aligns with well-established evidence.

“Various vital but vulnerable mechanisms such as calcium channels may be disrupted by environmental agents, various genes associated with autism, or the interaction of both. With dramatic increases in reported ASCs (autistic spectrum condition) that are coincident in time with the deployment of wireless technologies, we need aggressive investigation of potential ASC – EMF/RFR links. The evidence is sufficient to warrant new public exposure standards benchmarked to low-intensity (non-thermal) exposure levels now known to be biologically disruptive, and strong, interim precautionary practices are advocated”, the paper concluded.

Dr. Ian Thornton, from the Psychology Department of the University of Wales Swansea, argued in a paper that temporal disruption from the environment may play an important role in the observed mirror neuron dysfunction, leading in turn to the pattern of deficits associated with autism. He suggested that the developing nervous system of an infant may be particularly prone to temporal noise that can interfere with the initial calibration of brain networks such as the mirror neuron system, and the most likely source of temporal noise in the environment is artificially generated electromagnetic radiation.

“To date, there has been little evidence that electromagnetic radiation poses a direct biological hazard. It is clear, however, that time-varying electromagnetic waves have the potential to temporally modulate the nervous system, particularly when populations of neurons are required to act together. This modulation may be completely harmless for the fully developed nervous system of an adult. For an infant, this same temporal disruption might act to severely delay or disrupt vital calibration processes,” Dr. Thornton affirms.

An Indian study from 2013 points to electromagnetic fields as one of those environmental factors implied in the causation of autism. “Electromagnetic fields emitted during their operation do not have enough energy to cause DNA alterations directly; however, ample evidence is available from in vitro and in vivo studies to demonstrate their ability to cause DNA alterations indirectly as well as epigenetic modifications. In addition to genetic alterations, the epigenetic modifications may have an important role in causing disruption of the nervous system leading to neurodegenerative disorders, including autism.”

Stewart D. Simonson identified an autism cluster area in Santa Monica that lined up with the highest power density of high gain microwave radiation in the overhead atmosphere of any cities in California. “That autism cluster area has three very busy airports and electromagnetic radiation will also reflect highly off overhead metal fuselages and wings of airplanes in addition to the additional radars and antennas installed on airplanes. Inversions in the atmosphere that lead to super refraction and ducting of electromagnetic radiation are also very common along coastal areas, like Santa Monica. Power Density of radiation striking the surrounding area will be highest during strong weather, fog and precipitation events when Doppler weather radar reflectivity is highest. Increased autism rates have already been linked with increased precipitation as well as air pollution, which could both increase reflected and refracted terrestrial radiation back to the local surroundings. Autism was also recently linked to environmental pollutants and childhood genetic mutations as well.”

A 2014 study that examined the effects of perinatal exposure to ELF EMF on some ASD-relevant behavioral parameters in mice was supportive of the hypothesis of a causal link between exposure to ELF-EMF and ASD. “Tests were used to assess sociability, preference for social novelty, locomotion, anxiety, exploratory behavior, motor coordination, and olfaction. The examined mice were all males and exposed to EMF during the last week of gestation and for 7 days after delivery. The exposed mice demonstrated a lack of normal sociability and preference for social novelty while maintaining normal anxiety-like behavior, locomotion, motor coordination, and olfaction. Exposed mice also demonstrated decreased exploratory activity.”

A strong hypothesis we should not discard

It is completely true that there’s not a proven link between EMF exposure and autism, but we can not discard the strong hypothesis many respected scientist have put on the table, plus many other strong studies that have been conducted along the years that support a strong link. By following this direction, we could find interesting answers along the way and determine, once and for all, if there’s something we can do to prevent autism from this perspective.

The truth is that we already know that electromagnetic fields from antropogenic sources have biological effects: we know it could cause DNA fragmentation, we know how some individuals are more sensitive to it than others, and we know how cells are disrupted by radiation and how this cellular stress response can trigger a large number of health effects that are not easily noticeable in a short term. These are facts.

If we know these facts, why is it so difficult or crazy to think EMF exposure could have an effect like this on children? They are more sensitive, they absorb higher amounts of radiation because of their undeveloped tissues and bones, and, unlike older generations, they have been exposed to EMFs since their conception.

“Personally, I think this is not about deciding whether or not EMFs cause Autism, but we need to ask ourselves a simpler question in the field of future EMF exposure research: Could EMF exposure be aggravating the symptoms of those in the autistic spectrum? Since we know that Autism has a spectrum, and at its most acute end, the individual is highly sensitive to external stimuli, which is an indicator of sensitivity in their nervous system. Could not this natural sensitivity in autistics be exacerbated and preventing them from a better quality of life due to EMFs? These are the questions that I believe we should ask ourselves, and studies should be pointing in that direction. In fact, I have had experiences in cases where, after controlling high electromagnetic exposure in a home where a family member has autism, a decrease in their closed and non-social behaviors was observed, as well as an increase in their disposition to socialize”, Joaquín Machado, EMF researcher and NOXTAK’s CEO commented in regards to this matter.

If we continue investigating and research determines EMFs as a possible cause or as an exacerbator of autism symptoms, we might find a strong way to prevent or improve the quality of life of individual suffering this condition, because electropollution is an environmental factor we can definitely reduce and control with the right measures, planning, and technologies.