Named as one of the emerging disruptive techs in the 2019 CTA Sustainability Report, this year NOXTAK® is back to the CES with new breakthroughs and is open to working alongside tech manufacturers. 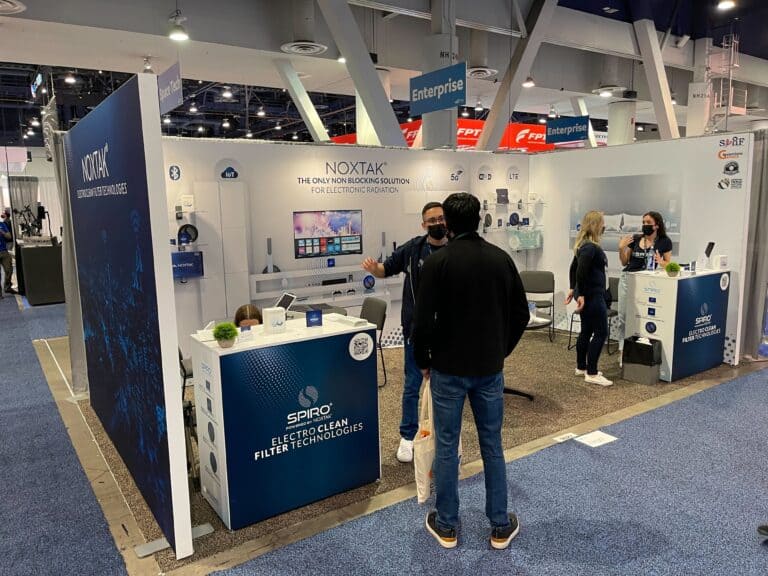 NOXTAK, a company that uses nanotechnology and environmental assessments to control the harmful effects of non-ionizing radiation from man-made sources, is physically back to the CES with new discoveries and applications for their technology, which they are willing to share with tech manufacturers looking for cleaner and healthier technologies.

NOXTAK started as a scientific project a decade ago. Since then, they have been working to find solutions to allow people to keep using technologies without side effects for their health, the environment, and technology itself. That’s how the SPIRO® (Spin Radiation Organizer Technology) material was born; a solution made using nanomagnetic properties to work as passive filters for interferences and disturbances (noise) from electricity and telecommunications.

Some products and proposals in the market are focused on blocking radiation by following a shielding approach that is unrealistic and harmful, as it affects the performance of devices and tends to produce a higher amount of radiation.

SPIRO is entirely different. It is the first non-blocking technology capable of filtering harmful emissions and frequencies from telecommunications, including 5G while enhancing the connectivity of any system.

“This year, NOXTAK is officially opening to work with tech manufacturers to help them implement SPIRO® into their devices, producing a new standard of quality and safety for electronics,” said Joaquín Machado, NOXTAK’s CEO and Co-Founder. “NOXTAK is also opening distribution licenses for companies in the US or worldwide that want to commercialize their products and services locally,” Machado added.

SPIRO is a worldwide patented technology that has received multiple awards, certifications, and international endorsements thanks to the numerous applications proved in labs, successful case studies, and pilot projects.

SPIRO material is packed with films covered by different recycled PVC layers that protect its unique nanomagnetic properties. NOXTAK adds more of this material according to the type of interference and disturbances that must be filtered. That determines the different sizes of the SPIRO cards and the thickness of the discs.

The SPIRO CARD is the smallest commercial solution available, especially for cellphones and personal devices. The next level is the SPIRO SQUARE, made for WiFi Routers and Wireless Computers, while the SPIRO DISC was created for Home & office spaces. Lastly, we have the STROOM MASTER, a 2 in 1 product that combines the functionality of an electronic filter to suppress the noise in power lines and the properties of the SPIRO material embedded to filter disturbances emanating from the current.

“SPIRO® is a scalable solution that can be used with every technology, and can even be built-in inside them. We have several discs that vary in thickness for bigger and more complex applications, such as semi-industrial and industrial levels. We adjust the formulation according to the needs, spaces, and emission levels to filter,” Machado said.

The passive filtering principle in the cards and discs can be measured with different instruments and professional software where the reduction of interferences and disturbances is noticeable. But the functionality of the STROOM MASTER filter can be easily measured using an EMI Meter.

The use of SPIRO has multiple benefits for human health, the environment, and even technologies. For example, SPIRO produces better connectivity. It generates a smoother propagation pattern around the antenna of telecommunications devices, reducing noise and interferences, improving upload, download, and abnormal heat concentrations in specific areas, extending the devices’ lifespan, and optimizing power consumption. SPIRO also ensures reliable and more stable connections in very complex environments such as hyper-connected systems (IoT, 5G, Public WiFi, Bluetooth).

Regarding health, SPIRO reduces the stress response in human cells by reducing the production of free radicals and oxidative stress. In case studies, SPIRO has shown an improvement in heart rate variability, the nervous system, and brain activity; and it also improves the sleep quality, focus, and sports performance of users.

SPIRO has been proven to have multiple environmental benefits too, such as protecting pets’ health, plants’ preservation, and especially helping bees in their essential tasks.

Finally, NOXTAK’s CEO mentions that they have recently discovered how SPIRO’s nanomagnetic properties can be applied for food preservation and to increase the antioxidant levels of water (the 4th phase of water).

“We officially invite manufacturers to look in this direction. Let’s innovate beyond cosmetic improvements and produce a new type of green and human-friendly technology. We can significantly improve electronics design and functionality by making them Electrosmog-Free, and the Spin Radiation Organizer Technology SPIRO® can be embedded into any electronic device,” Machado added.

NOXTAK is open to cooperating with manufacturers, institutions, and governments to help ensure an easy path and a proper upgrade of all technologies. They firmly believe that green or recyclable is not enough now; the day for Human-Friendly Technologies is finally here.