Electrohypersensitivity or nocebo effect?: the discomfort related to EMF Radiation is not always justified

Electrohypersensitivity has physical signs that have been made public through the years. Thousands of people suffer from this and the number grows every year. But could someone, instead of suffering actual sensitive reactions, feel these symptoms by just believing it? According to psychologists, yes. 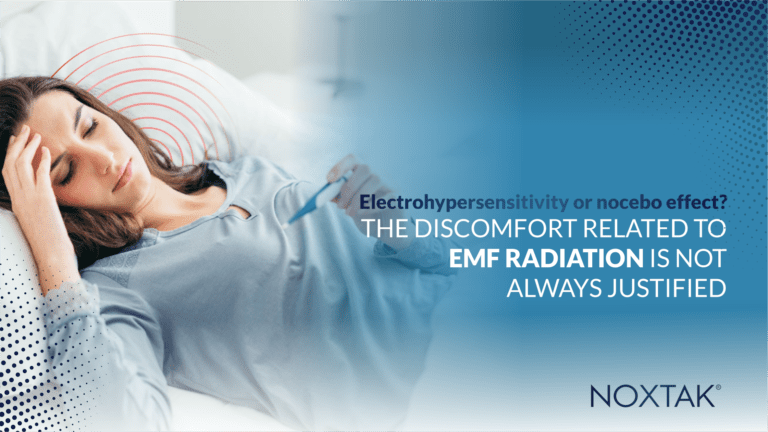 You’ve probably heard of the placebo effect, what happens when patients think they’re getting a miraculous new drug, but what they’re really getting is just a mint or a sugar pill. Then, in a case of “mind over medicine,” they start to recover from their affections because, the whole time, they thought they were taking a real drug.

But the placebo effect has some sort of dark side, a negative effect psychologists have called the nocebo effect. It’s what happens when you’re given a sugar pill and you are told that this drug has horrendous side effects, and you actually start to exhibit those symptoms by just believing it.

This happens with drugs, surgeries, and medical treatments equally; but guess what? It also happens with electromagnetic radiation, and as fear and conspiracy theories spread, this effect becomes a more common and dangerous reality every day.

In this article, we will dig deeper into this matter with the help of Dr. Robert Leal, Ph.D. in Cognitive-Behavioral Psychology and consultant at the NOXTAK Center, who will tell us more about this effect based on his professional experience.

Just as we mentioned before, the nocebo effect is the opposite of the placebo effect. The term nocebo comes from the Latin ‘to harm’. It describes a situation where a negative outcome occurs due to a belief that the intervention will cause harm. It is a sometimes forgotten phenomenon in the world of medicine safety.

Women are 30% more prone to suffer the nocebo effect

In studies that have been done over the years, it has been determined that at least 19% of people indicate negative side effects from using a substance whose chemistry cannot explain that negative effect, because they are receiving something that does absolutely nothing.

As stated by Dr. Leal, this effect has been observed more frequently in women. “In 30% of women and in men 20%, but there are people who are more likely to be conditioned, to respond to these conditions, to these associations. These types of people have personality factors, for example, pessimists, people who are worried all the time, people with lots of negative emotions. These types of very negative people tend to have a nocebo effect very easily”.

The specialist also mentions that Type A personalities, very well known as competitive people at work or academically, tend to get impatient very easily and, generally, with hostile attitudes, could be very susceptible to the nocebo effect too.

Logically, people whose personal experiences have been negative around a specific matter are also susceptible to this. “People who have experienced negative situations themselves concerning a chemical, electromagnetic radiation, or any situation. They, themselves, have experienced very negative situations and were shocked, what people call “they were traumatized”; So they have made very strong associations with these very unpleasant sensations, and this means that later, even if they are not under those conditions but are told that they are, they feel the same side effects when it is not real. This has to do with their previous personal experiences”, the NOXTAK Center consultant added.

This also happens to people who are sentimentally or emotionally linked with other people who have suffered side effects under certain circumstances. When they are under circumstances that are not real but are told that they are, like someone tells them “You are taking a very strong chemical that produces that” and it is not true, they are going to feel the same side effects that these friends or relatives felt.

People could suffer the nocebo effect related to electromagnetic radiation

According to Dr. Robert Leal, an individual can, indeed, develop a nocebo effect related to electromagnetic radiation.

“In 2004, the first experiment that was made around the nocebo effect was connecting people to devices that could give them electric shocks. This group of people was told that these shocks were going to be imperceptible, that they were not going to feel the shocks, but they would definitely receive them. They were told that the only problem is that they could have severe headaches later. Well, the result was that, almost everyone, had a really bad headache later; but the devices were turned off all the time and never gave any kind of electric shock”, the expert affirmed.

So, certainly, this effect can happen not only with chemicals and drugs, it can happen with electromagnetic radiation. The nocebo effect can be present in a very wide spectrum of any drug, or aspects of electricity, radiation, or whatever else that has a possible perceptible physical effect.

Fake news is making this phenomenon grow, especially around EMF

The nocebo effect can be influenced by ‘media storms’. Widespread dissemination of concerns about an adverse reaction to medicine leads to an increase in the number of reports of the adverse reaction. For example, in 2013, British media highlighted the adverse effects, including muscle pains, of statins following an article in the British Medical Journal. An estimated 200,000 patients stopped taking statins within six months of the story being published, many due to adverse reactions. There was also an increase in the number of adverse reaction reports of rhabdomyolysis with statins during this time. This incident has since been attributed to the nocebo effect.

Non-ionizing radiation has cumulative biological effects on our bodies at a cellular level, which lead to permanent health problems that manifest in the long-term with no apparent cause. While it is true that some individuals could develop physical symptoms due to exposure to electromagnetic fields (headaches, body pain, lethargy, sleep problems, tinnitus (ringing in the ear), nausea, burning sensation, heart arrhythmia, anxiety, and more), not everyone may feel the same immediately, as electrohypersensitivity is usually developed by subjects who experience multiple sensitivities along their life or suffer another kind of illnesses that make them especially sensitive.

Sadly, many people are really susceptible and believe information with no scientific basis. That’s the reason why, nowadays, there is a huge amount of people suffering the nocebo effect related to electromagnetic radiation, feeling symptoms with no real justification, or attributing to EMF some effects or health problems that are scientifically impossible.

“NOXTAK’s customer service team frequently encounters cases of people suffering from the nocebo effect; people who tend to manifest reactions of discomfort just by seeing photographs of cell phone antennas, so negative mental conditioning is an important element to consider in the equation. In some cases, people with electrosensitivity manifest that they have this negative traumatic association with the sources that originally produced an alteration in their quality of life and deteriorated their health condition. That’s why, with the collaboration of professionals and specialists such as Dr. Leal, we suggest taking a differential diagnosis quiz that allows the individual to identify the existence of mental conditioning and nocebo effect associated with radiation in our assistance protocol for individuals suffering from electromagnetic sensitivity”, Joaquín Machado, the CEO of NOXTAK, commented.

Not easy to identify, but there are solutions

An individual has no way of knowing that he/she is under the nocebo effect until the moment in which they are told “Look, you were not being given an electric shock, “You were not consuming this, we tricked you, this did not happen”. That is the only way for people to know the truth of what is happening; but as long as they don’t know, they will really continue to feel those side effects that are pretty much real in their bodies, but the cause is unreal.

The good news is that once identified, it has a solution. As specified by our consultant, “to overcome this nocebo effect concerning electromagnetic radiation, taking into account that the person has been fitted with devices to neutralize the radiation and, in any case, the person still feels the side effects, it would be treated similarly to how it would be eliminated under other types of situations, which can be substances or anything else”.

According to his experience, the first strategy, which happens to work only with a very small group of people, is giving them correct and precise information. This consists of explaining to the person what is happening, how it works, and all the details around it; it is about reasoning with them in the most logical way possible.

“For example, people who are very afraid of flying, of getting on a plane, if you explain to them “Hey, it’s very difficult for planes to fall”, “That rarely happens”, “The percentages of deaths in Airplanes is something very rare”,“ Thousands of people die annually in traffic accidents instead of planes”… The person understands that, understands the logic, and knows that it is true; but their fear of flying is not removed. There is a small group of people for whom pure logic and pure reasoning do help, but it is a small group, the rest are not like that; and this is very typical of phobia, where logic does not help”, Dr. Leal mentioned.

In the case of the group that does not overcome the effect with logical reasoning, Dr. Leal suggests behavioral therapy, cognitive-behavioral therapies, or contextual therapies. But he also mentions that therapies in the cognitive-behavioral area have the best effects in these cases, as people who are having side effects to electromagnetic radiation that they are actually not receiving, are doing it by association, by classical conditioning; so it would be important for this person to go through this specific kind of therapy.

And how long could it last? This depends on the individual. “There are people who can last a little less or a little longer, but let’s say an average of 2 weeks because people would be given tasks to perform, and if they are committed and perform their tasks in an average of two weeks, this nocebo effect could disappear. It also depends on the personality variables”, the psychologist commented.