EMF Fact-Checker: If I’m far away from urban areas or telecommunication antennas, am I still exposed to EMF? 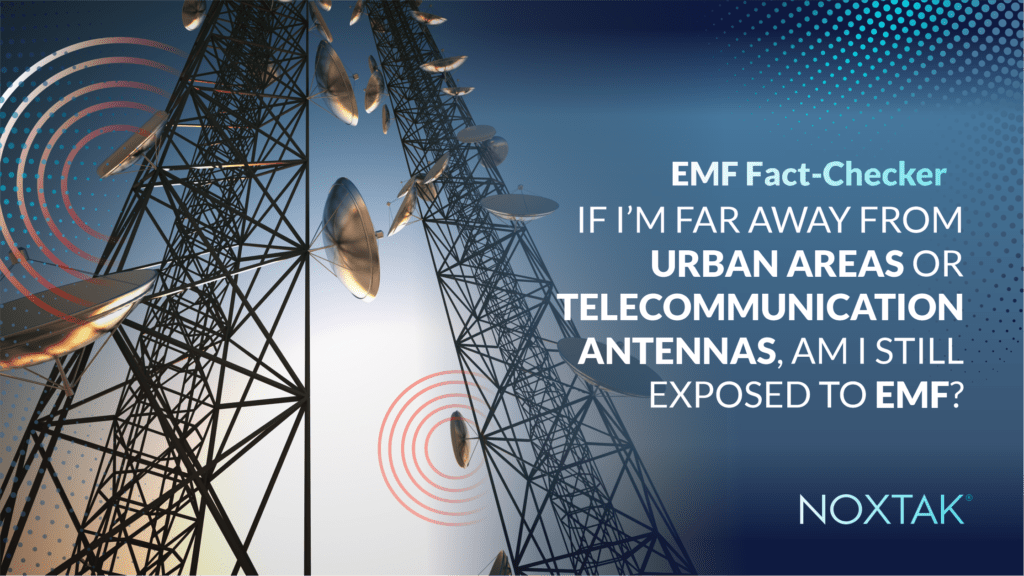 Electrosmog is wherever we are, and it is not only associated with urban activity or telecommunications antennas; it is also inside our homes and offices, generated by electricity, appliances, signals, and electronics that we use in our daily lives.

First of all, there are multiple ways to define electropollution. It can be high-frequency signals, low-frequency signals, signals associated with alternating current, direct current, electrostatic flux, magnetostatic flux, electromagnetic interferences, unbalanced charges, etc. To summarize, we can say that electrosmog is a set of interferences and chaotic frequencies that don’t resonate with the natural electrical and magnetic states in our cells.

It is necessary to understand the nature of the fields that surround us every day to know why we need protection wherever we are, although we must adapt to different levels and needs. One of the most accurate ways to measure and control electrosmog is to classify it by far-field and near-field exposures.

The near field is the region closest to the antenna or device. It covers the entire physical structure of the antenna or device and some way beyond, eventually merging into the transition region and finally into the far-field area. Near-field exposure has more immediate effects on our bodies.

A building that does not contain many electronics and appliances is not the same as a building full of electronic devices in terms of exposure. We can go even deeper and say that it is not the same to be in a room that does not have any type of technology as one that is full of it. For example, between a room without technology and another with technologies, the difference will be significant, since in the equipped room we have near electric and magnetic fields that are associated with the appliance or the electronic device for its sole operation, as it requires a source of electrical energy that powers it.

The mere fact that a device is working will produce an associated field with a range, a kind of bubble surrounding it. That range will be bigger depending on the energy the machine requires. For example, the amperage that this appliance demands significantly defines the field strength associated with its operation.

So, the far-field is the region where the relationship between an EM wave’s electric and magnetic components is fully developed. Far-field exposure has a less immediate impact on our bodies, but it still has effects in the long term.

Someone living in the countryside is still exposed to far-field electromagnetic emissions because we are immersed in this wherever we go. But there’s always to keep in mind: the exposure becomes smaller when someone becomes more isolated from the city. But does that mean that the smallest exposure doesn’t hurt? Technically, it feels alright, and there may be an absence of symptoms because the body has a certain tolerance level. Still, studies indicate that even impulses of up to 5 picowatt of power can alter oxidative stress at the cellular level.

That means that even people who are isolated far away and feel good are still suffering. In medicine it’s commonly said: The absence of symptoms DOES NOT MEAN the presence of health. This applies here too: The absence of symptoms does not imply they are not exposed to an electromagnetic impulse that will produce and lead to an alteration in the correct functioning of their body tomorrow.

The need for protection is equally important, no matter how far you are from a polluting source

In practically any place in the world, you’ll find places where the environment is pure and with very negligible far-field exposures. Nowadays, this pollution is wrapping the planet all the time, 24/7.

So, the reality is that both kinds of exposures are harmful, but they affect us differently. In this sense, we need a lower intensity of protection for people exposed to far-field emissions, as the intensity of the fields is not as important as near-field emissions. Protection should be custom-made for the different levels of exposure we experience every day and in every circumstance.

Lastly, keep in mind that electromagnetic exposure affects us and all biological species. Electrosmog produces an imbalance in species, the natural ecosystems and continues affecting nature in many ways that are yet invisible to us.

Unfortunately, many people aware of electrosmog look down on the environmental and species impact, like the possible links with the extinction of bees, influence in migration of birds, and so on…

For that reason, NOXTAK is working with an integrative vision. We seek to create electrosmog-free environments and a future with clean technologies that make it possible to develop electromagnetically healthier cities.