Dr. Johansson is one of the highest authorities in the world in terms of knowledge of the effects of electromagnetic fields on health. He began researching it more than 30 years ago, and has since published hundreds of scientific papers. 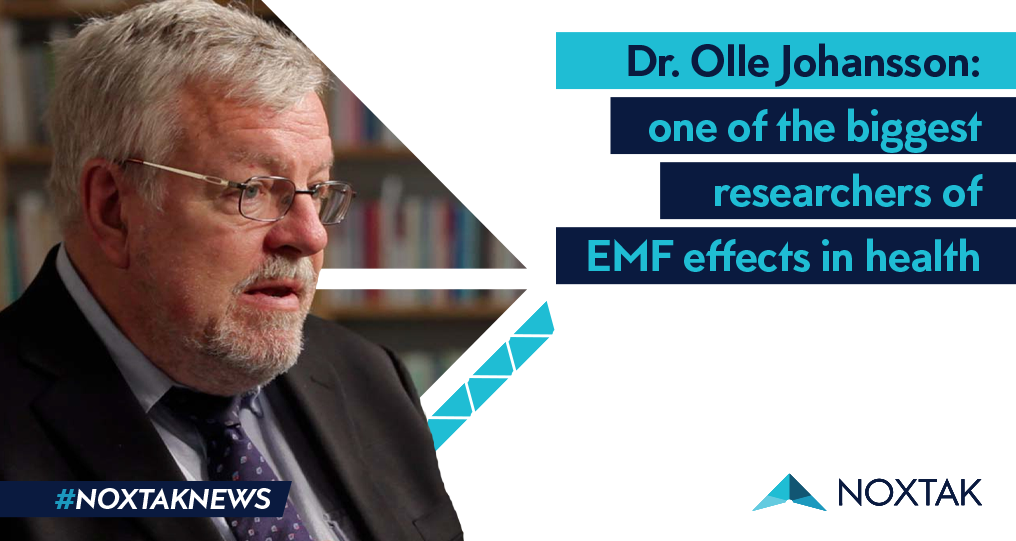 Dr. Olle Johansson is an associate professor, head of the Experimental Dermatology Unit, Department of Neuroscience, at the Karolinska Institute (famous for its Nobel Prize in Physiology or Medicine) in Stockholm, Sweden. He has been considered a world-leading authority in the field of EMF radiation and health effects.

He is part of a group of independent scientists from around the world who have been warning us for years of the serious risks to the health of all living beings posed by the brutal radiation levels to which new wireless microwave technologies from radio antennas, telephony, wi-fi, mobile phones, etc.

Dr. Johansson’s studies have been widely recognized in the media, including newspapers, radio, and TV, as well as on the Internet, both nationally and internationally. He has on-going international scientific collaborations with e.g. Japan, Brazil, South Africa, Serbia, Germany, the UK, and the USA.

In 2015, Dr. Johansson made a presentation for the Asociación Oikos Ambiental, a Spanish ONG, where he made several serious claims about the EMF problem. According to him, it has been ten or fifteen years that the industries related to this matter, such as operators, insurance companies, and tech manufacturers said refused to assume any responsibility for the health effects of electromagnetic fields. And this is more revealing than any political decision, or anything that can be found by investigating.

The World Health Organization classified the electromagnetic fields of all these devices as carcinogens. Both, the electric network frequency magnetic fields, and also the radiofrequency fields, including microwaves that are used for telecommunications. And they wouldn’t have done that if they were safe. According to the information that Professor Johansson handles, this is due to the fact that they do not want to end up as a responsible body before a Court of Justice.

In the 1920s and 1930s, there were anecdotal stories of people saying that they were unwell around new electricity, and in the 1950s there were many amateur radio users who also had many symptoms such as severe headaches, etc. But it really wasn’t until the late 1970s that Nancy Wertheim and Ed Leeper in Denver, USA, linked power lines to childhood leukemia, preceding the World Health Organization classification in 2001, considering the magnetic frequency fields associated with childhood leukemia as carcinogens.

For example, the Bioinitiative Report has many documents and summaries around the problem and it is constantly updated. But, there is also a short summary that was published after a meeting in Norway in 2009, and it is the so-called Declaration of Seletun. It summarizes in a simplified way, paragraph after paragraph, what we have to do, and the type of levels that are recommended.

So, for several years, there was already a lot of evidence pointing out that this type of artificial, modern, man-made electromagnetic fields did damage molecules, cells, tissues, organs, animals, plants, bacteria, etc. And since then there has been an overflowing flood of new posts. But what worries Doctor Johansson is that despite all this, people are not worried.

So they say “this can be potentially carcinogenic”, and leave it to the consumer to decide whether he and his family should be exposed, or not. And for Dr. Johansson, as a scientist, this is very strange. All of them have delegated all responsibility to society, governments, and parliaments. For their part, radiation protection authorities in many countries say that all this is safe, but that, for the same security reasons, perhaps we should not use the mobile phone so much, and we should keep it away from our body, use hands-free devices, etc.

The Swedish approach to the EMF problem and his contributions

As early as the 1930s, EHS (Electrohypersensitivity) symptoms were observed in people working with radio and electricity, and with military radar in the 1940s. Environmental EHS appeared in the general population from the 1970s with computers and it increased in the 1980s with mobile and cordless phones, and with wifi from 2000.

Sweden recognized EHS as a functional impairment (not a disease) in 2002. Survey studies showed that somewhere between 230,000 – 290,000 Swedish men and women – out of a population of 9,000,000 – reported a variety of symptoms when being in contact with electromagnetic field (EMF) sources. Swedish electrohypersensitive people have their own handicap organization, The Swedish Association for the Electrohypersensitive, which has its own website in both Swedish and English. This organization is included in the Swedish Disability Federation (Handikappförbundens SamarbetsOrgan; HSO).

According to Dr. Johansson, all people with a functional disability such as electrohypersensitivity have the right to have a normal life in a society based on equality. This is also based on what the United Nations have written, stating that one of the most important principles to achieve is that of full accessibility. Therefore, people with different disabilities should have access to everything, regardless of the type of disability they have.

This approach has many implications, for example, forcing a person to quit their job or move out of their home is a very serious legal violation. The same happens with children since it is not allowed to discriminate against their educational rights. So, in essence, according to Dr. Johansson, people with a functional impairment like electrohypersensitivity, should simply enjoy their Human Rights by having a guarantee of full accessibility.