Is it possible that EMF is affecting athletes’ performance? If so, how could it be? Oxidative Stress has been one of the many proven effects of constant exposure to EMF, and it can definitely affect the physical performance of an individual. 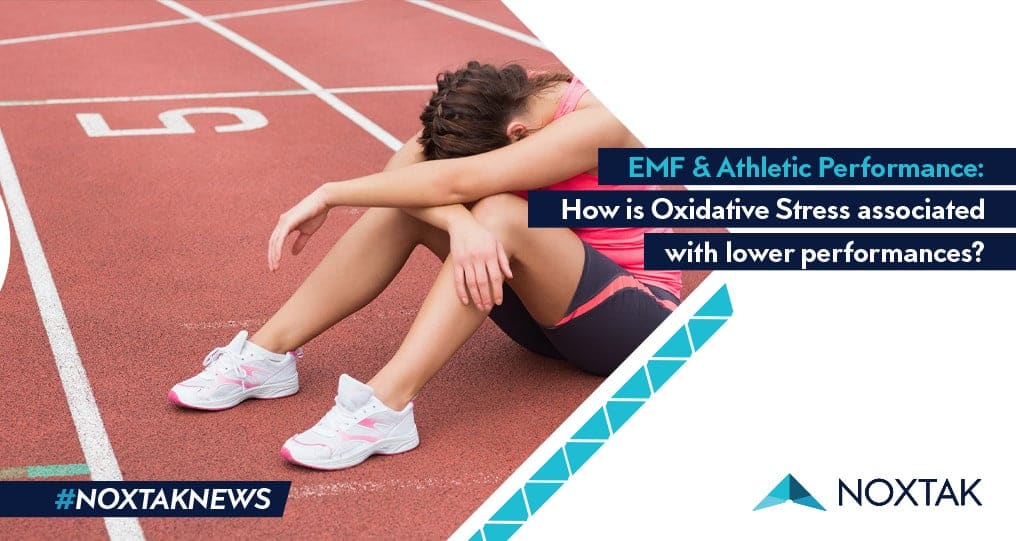 Humans have participated in sports for ages. Maybe not in the same way as sports are viewed nowadays, but we evolved and survived practicing physical motions that are still used today on a professional level.

With the introduction and growth of competitive sports, experts began looking for ways to improve athletic performance in order to increase an athlete’s possibilities to win. Today, every athlete at every level or discipline is always looking to keep and even improve their sports performance in order to be better and more competitive. But working in sports’ performance requires a thorough understanding and awareness of the many factors that might affect it, internal or external.

So far, many athletes and coaches are aware of these factors and train around them. But the science behind athletic performance progresses and we keep researching, we keep discovering other uncommon factors that are being ignored, such as the athlete’s EMF exposure.

But how is that even possible? In this article, we will talk about how the Oxidative Stress produced by EMF exposure affects athletes’ sports performance.

Oxidative stress is an imbalance between free radicals and antioxidants in your body. Free radicals are oxygen-containing molecules with an uneven number of electrons that allow them to easily react with other molecules. Free radicals can cause large chain chemical reactions in our bodies, and these reactions are called oxidation.

Oxidation is a normal and necessary process that takes place in our bodies. Oxidative stress, on the other hand, occurs when there’s an imbalance between free radical activity and antioxidant activity. When functioning properly, free radicals can help fight off pathogens. But, when there are more free radicals present than those that can be kept in balance by antioxidants, the free radicals can start damaging lipids, DNA, and proteins in your body; which can lead to premature aging or a vast number of diseases over time, such as diabetes, atherosclerosis, inflammatory conditions, high blood pressure, heart diseases, and cancer.

Wade Knez, from the ASPETAR Sports Medicine Journal, defines Oxidative Stress as “the total burden placed on organisms by the constant production of free radicals in the normal course of metabolism plus whatever other pressures the environment brings to bear (natural and artificial radiation, toxins in air, food, and water; and miscellaneous sources of oxidizing activity, such as tobacco smoke)”.

Electromagnetic fields (EMF) have various chemical effects, including deterioration in large molecules in cells and imbalance in ionic equilibrium. Several studies have reported that exposure to EMF also results in oxidative stress in many tissues of the body, increases free radical concentrations and traceability, and can affect the radical couple recombination.

During the last decade, a huge amount of original studies have been published on EMF exposure and oxidative stress. For example, a study published in 2017 by a group of Turkish researchers stated that “The Fenton reaction is a catalytic process that converts hydrogen peroxide, a product of mitochondrial oxidative respiration, into a highly toxic hydroxyl free radical. Some studies have suggested that EMF is another mechanism through the Fenton reaction, suggesting that it promotes free radical activity in cells”.

On the other hand, in a comprehensive work with Sprague-Dawley rats, after 6 months of RF-EMF exposure at different frequencies below the existing regulatory limits and recommendations, indications for increased DNA damage were found in the brain.

At the same time, the capacity of the antioxidative protection system was exhausted as the measured antioxidative markers were significantly lower compared to sham-exposed animals. These results indicate that oxidative stress induced by RF-EMF can lead to DNA damage in neurons during prolonged exposure of the animals. Virtually identical results were also found in several other studies.

Oxidative Stress and its incidence in Sports Performance

Exercise training, by itself, increases the production of free radicals and reactive oxygen species in different ways. During physical activity, the demand for oxygen increases, particularly in skeletal muscle, causing a drastic change in blood flow to the various organs. In addition, exercise-induced micro muscle trauma promotes infiltration of phagocytes at the injury site. These physiological changes that occur during acute exercise increase the production of free radicals, inducing oxidative damage to biomolecules.

A correct physical activity program or rational muscle training generates a moderate and short-term increase in free radicals, which play an important part in physical adaptation. But there’s something that’s being ignored: in addition to the free radicals naturally generated by exercise and other known external factors, athletes are also generating a higher amount of free radicals due to EMF exposure.

It’s important to note that the health benefits of exercise are limited by the overaccumulation of reactive oxygen species (ROS). So yes, further or excessive oxidative stress could potentially affect an athlete’s performance in many ways.

Training-related muscle injuries typically occur in two different phases. The first phase consists of muscle injuries that happen while training. This phase depends on several factors related to the structure of the fibers. The second phase is linked to delayed inflammatory processes. Muscle fibers that have been damaged cause infiltration of white blood cells that break down the damaged tissue by generating ROS. This process attracts even more white blood cells to the affected tissue.

Several studies have revealed that retired professional athletes have a significantly higher risk of developing neurological diseases such as Alzheimer’s, Amyotrophic Lateral Sclerosis, and suffer a progressive loss of neurons that impairs motor skills and cognitive skills.

Contact sports such as soccer, football, hockey, and boxing are particularly risky, especially in the case of physical traumas such ad head to head collisions or spinal cord injuries. A study of 7,325 male professional soccer players, who played in the Italian first and second division during the period from 1970 to 2001, showed a significantly increased risk of developing Amyotrophic Lateral Sclerosis.

Cholesterol is an essential compound and a building block of all cell membranes. It is required for making various hormones, vitamins, and coenzymes. Cholesterol is only harmful if free radicals oxidize it. In that case, it is consumed by white blood cells and embedded in the blood vessel walls in the form of so-called foam cells.

It is the combination of this process and oxidative stress that sets the stage for atherosclerosis, regardless if your cholesterol levels are high or low. Oxidative stress and the subsequent oxidation of LDL is considered a major contributor to the impairment of endothelial function and the development of atherosclerotic lesions.

Are there ways to eliminate that EMF-induced Oxidative stress?

Oxidative stress is inherent to intense physical activity and it’s even necessary to a certain extent, so it’s not possible to eliminate it completely from sports. What we can actually do is to work on the best ways to control or completely eliminate the external sources that can induce oxidative stress and cause a dangerous excess in practicing athletes.

Nowadays, gyms, stadiums, and other sports establishments are highly technified for different reasons. There are special pieces of machinery to train, register, and measure performance; they need high-intensity illumination systems, ventilation systems, power stations, and even robust connections and equipment to live stream matches and competitions.

All of these elements create a cocktail of artificial electromagnetic radiation that is generating higher amounts of oxidative stress in athletes, affecting their performance and exposing them to long-term risks to their health.

Although it seems hard, there are possible ways to control EMF. The answer is to start working on creating cleaner spaces for athletes to train and practice. This can be achieved by impulsing better planning for technology deployment in these places, coordinating the manufacturing of electro-clean sports machinery with specialized sports brands, and using filtering solutions that 100% eliminate the harmful effects of EMF.

At NOXTAK®, we have worked non-stop for years in order to create an effective, realistic, and scientifically-based solution that helps sports teams and federations keep evolving and using technologies while protecting their athletes’ health and performance. SPIRO®, our patented and awarded nanomagnetic material, is the only scientifically proven non-blocking solution in the market that, instead of blocking electromagnetic waves, filters them and makes them compatible with our bioelectrical system, completely eliminating the harmful effects of electropollution.

If you want to learn more about the SPIRO® family of products, go to our products section. To get more information of interest like this, subscribe to our newsletter in the form at the bottom of this page!