In the last 2 years, mentions of the promises of 5G have become a trend and have even become the central axis of debates about new technologies. Much has been said about what it will be, but how much of those promises have been kept? Is 5G really what we are experiencing or just faster connectivity? 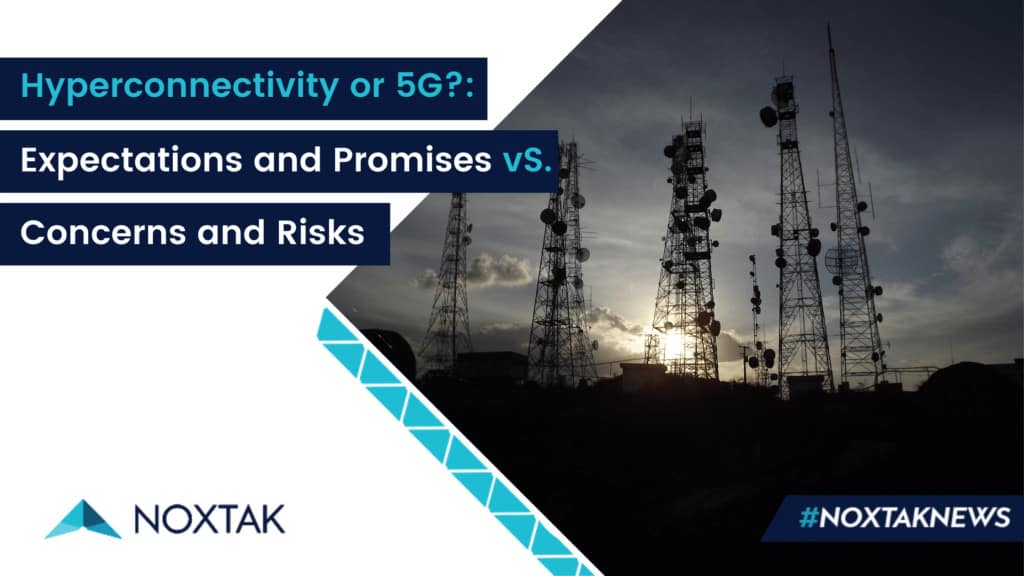 Hyperconnected networks are spreading around the world and consumers are massively beginning to adopt the use of new phones with higher capabilities that facilitate hyperconnectivity. Slowly and inadvertently to the common user, the much-hyped promise of out-of-this-world performance is beginning to become reality in industrial, semi-industrial, and corporate sectors; but, according to large telecommunications companies, the most significant improvements in hyperconnectivity are yet to come.

Technology lovers are thrilled and expectant, as these new networks should significantly improve the mobile user experience and lead to a host of new services and businesses. However, the slow implementation of the 5G platform has produced a discouragement in users whose expectations they feel have not been met.

In addition, we must not forget that there is a high negative perception and concern in common people about the potential health risks of such technology. Statistics tell us that 2 out of 10 people in the United States are concerned about the health implications of 5G. This has brought the topic of electromagnetic pollution into public discussions, which is good; However, the foundations of these concerns have unfortunately centered on conspiracy theories of population control, extermination, and promotion of the coronavirus, removing the seriousness of this discussion and tainting the educational programs of organizations like us, who understand the electromagnetic problem and who know that 5G is only one part of a whole cluster of fields and frequencies harmful to health that will certainly bring worryingly an even more exponential growth than what we have been seeing in recent years through our permanent monitoring of electromagnetic emissions in cities.

The Problem of Conspiracy Theories

Although it is a subject to analyze in-depth in another article, at this point we must mention that the greatest damage is the fact that conspiracy theories around the world about 5G, generated so much terrifying expectation in thousands of non-electrohypersensitive people that they believed in the health risks and that, at the apex of the crisis in April 2020, they almost certainly thought they would see the massive “extermination” and death by 5G in the coming months.

Today, in August 2021, some 16 months later, many of these people feel a feeling of having been deceived by social networks, so now they have gone to the other spectrum of public opinion, thinking that it was a ridiculous and silly idea have believed that 5G would kill them as these “experts” on the internet put it. Only those who previously to 5G already knew about electromagnetic pollution and/or those who suffer from electromagnetic sensitivity understand.

According to our CEO and CEM researcher, Joaquín Machado, it all comes down to understanding that electromagnetic pollution is not going to kill you overnight, but rather it is going to compromise your health at the cellular level to the point that you are going to get sicker. and more seriously in the long term with the years of exposure and that, with greater contamination, the long-term effects will be evident in a shorter period of a few years.

“Non-profit organizations who have fought to bring the issue back to the consideration of regulators and government institutions have been branded as tabloids and conspirators and their messages have not transcended the activist sphere in their regions. Around these serious and responsible organizations, have joined activist groups that want to take advantage of the wave of “trend” that this issue is and have become unqualified and irresponsible spokespersons on an issue that should not be treated with yellowishness and with such technical ignorance on the operation of said technology. Actual efforts are not only to educate, but we must also organize ideas and clarify what today is a very confusing topic, with non-expert spokesmen and doctors talking about frequencies and waves without understanding how a telecommunications transmission network works”, commented our CEO and EMF researcher, Joaquín Machado.

So, beyond all the sensationalism, the enthusiasm for the indisputable benefits, and the divided opinion matrices; there is a real risk regarding the environmental, health, and safety costs that the full deployment of this new generation of telecommunications will bring.

Undoubtedly, there is more than one side to this story, and we, as techies and environmental professionals, are experiencing both: this duality of excitement and concern. At NOXTAK, we feel a need to address this issue in parts to really understand this technology and what is the real context in which the expectations and opinions around it are set. Therefore, in this article, we are going to analyze the architecture around Hyperconnectivity that 5G has promised to bring and its current status for this moment.

The expectations and promises

Connections are reaching what we thought were unreachable places

5G networks can take the internet to places and communities without access to it before. According to a report made by eMarketer, in the US, the networks cover most of the population, but most connections still don’t offer a significant performance improvement. That should change once networks build a new core infrastructure with edge computing and move to standalone 5G services, i.e., where all connection elements are 5G. It will take a few years until this is the case in the US and other leading countries, such as South Korea, Japan, Switzerland, and China.

According to eMarketer, Businesses will be able to collect vast amounts of data from numerous remote devices, store and work with that data in the cloud, and control operations remotely. Private networks and better connections will also let them reimagine the design of office spaces, factories, and stores—and how their workers interact within each.

Also, the Internet of Things (IoT) is changing the way companies think of data and connectivity. IoT devices generate tons of data that businesses want to analyze, and many companies are planning to create an entire IoT ecosystem. With the higher data speeds of 5G, enterprises can access that data quicker and accommodate every device at the IoT edge with increased capacity.

An open door to the next generation of entertainment

The Concerns and Risks

a growing concern on cybersecurity

The rapid expansion of 5G will require a new approach to cybersecurity. As with any breakthrough technology, hackers will find ways to exploit vulnerabilities. Many are concerned that we are making access to our data and systems easier with this increased connectivity and speed.

5G network is managed by software which makes it vulnerable. Also, the expansion in bandwidth creates additional avenues of attack; and with more devices connected via IoT, it presents a much larger attack surface for cybercriminals.

small cell antennas to close together

It’s not just the frequency of 5G that makes the network so fast; it combines frequency and the new technology in the masts. However, 5G will not travel as far from the masts as 4G, and objects such as tall buildings and trees are likely to obstruct its path. So, to deliver the speed and service expected, telco companies must install numerous 5G small cell antennas for even coverage. This is not only expensive and time-consuming but highly polluting and potentially harmful in the long run for people and the environment.

According to a report made by Local Progress, the problem is that companies don’t want to work with local governments to do this implementation the right way, opting instead for unfair deals that drain public coffers, ignore worker and public safety, and do nothing to bridge the digital divide. This is a long topic with many social, health, and environmental repercussions, so we will discuss it more broadly in a future article.

According to MTN Consulting, Telcos spend on average 5% to 6% of their operating expenses, excluding depreciation and amortization, on energy costs, and this is expected to rise with the shift to 5G.

A typical 5G base station consumes up to twice or more the power of a 4G base station, and energy consumption can grow even more at higher frequencies due to a need for more antennas and a denser layer of small cells. Edge compute facilities needed to support local processing, and new internet of things (IoT) services will also add to overall network power usage.

In the long term, this power consumption matter should be reviewed and solved to optimize costs and minimize environmental impacts.

There has been an immense amount of chatter around the harms of 5G, but most of it is based on conspiracy theories or baseless beliefs, such as the ones stating that 5G is the beginning of massive mind control or that it was the cause of COVID-19. Nothing is falser than those claims.

However, there should be a valid and substantiated concern about the increase in electromagnetic pollution and what that means for our environment, ecosystems, and public health. Today’s 5G networks operate at frequencies similar to 4G and Wi-Fi, so they are not so different from what we have been exposed to so far.

But the fully implemented 5G should work at frequencies above 30 GHz, and that is five times higher than what our body is used to. And it is a cause for concern on valid grounds. High frequencies mixed with so many antennas together could create a powerful cocktail of EMF radiation of proportions never seen before. While this might not be noticeable to most people right away, as we have said before, in the long run, a hyper-connected platform with links and devices operating in millimeter waves above 30 GHz (something that is not happening yet and that is a few years away) can have important and serious consequences on people’s health and even sensitize the population to such an extent at the cellular level due to so much electrical stress stimulation that we could see an increase in pandemic proportions of electrohypersensitivity in people who hasn’t yet experienced such a condition.

Of course, by no means the solution is to stop the implementation of 5G or discard the use of our most loved and necessary technologies, that is also an unrealistic approach and a route that practically nobody is willing to do permanently. We firmly believe that the answer is to work on cleaner technologies that are respectful of the environment and human beings; In addition, joint work and better planning are necessary to ensure that new technologies such as 5G are safe enough for users and communities. 5G is not a problem that cannot be solved, it is something that we can filter and design its implementation in an effective and especially healthy way for users, but as we have said before, the multidisciplinary participation of science and technologies such as SPIRO, that allow the co-existence with these electromagnetic emissions from artificial sources.

At NOXTAK, we have been actively developing solutions to filter out the harmful effects of EMFs while allowing people to freely use and enjoy technologies. Our SPIRO solution is the only non-blocking solution on the market that is scientifically proven, patented, and award-winning. This technology protects you from the effects of electromagnetic fields generated by your wireless devices and networks, while significantly improving the quality of your connections and the performance of your devices.

If you want to learn more about the SPIRO family of products, go to our products section. To get more information of interest like this, subscribe to our newsletter in the form at the bottom of this page!